WPLC attorneys filed legal arguments today asking the 8th Circuit Court of Appeals to overturn a North Dakota federal district court ruling upholding local law enforcement agencies’ indiscriminate use of high pressure fire hoses and dangerous munitions on protesters. The plaintiffs want the appeals court to order the lower court to grant an injunction prohibiting law enforcement from shooting indiscriminately into crowds of protesters, or at minimum, order the lower court to hold a hearing to hear directly from witnesses for both sides on the water protectors’ request for a preliminary injunction. 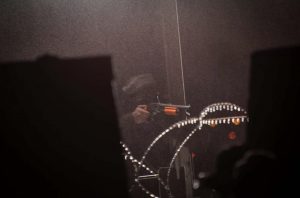 On Nov. 20, 2016, lead plaintiff Vanessa Dundon was severely injured and partially blinded when she was hit in the face with a teargas canister. 300 people were treated for injuries ranging from hypothermia to fractures to partial loss of a limb when the Morton County Sheriff turned fire hoses, impact munitions and explosive grenades on water protectors who were protesting and praying on a bridge near the Dakota Access Pipeline (DAPL) construction site and within the boundaries of Oceti Sakowin (Seven Council Fires, or Great Sioux Nation) treaty lands. Ms. Dundon, who is a Navajo Nation member, and eight other named plaintiffs are suing Morton County Sheriff Kyle Kirchmeier and other officials in a civil rights class action which seeks both injunctive relief and compensation for the injured.

“Judge Hovland denied the preliminary injunction motion without a hearing, even though he acknowledged that there were major factual disputes between the two sides,” said WPLC cooperating attorney Rachel Lederman, lead counsel for the Dundon plaintiffs. “The judge accepted law enforcement’s tale of being overrun by violent rioters even though we filed 50 sworn declarations telling a very different story. The vast majority of the water protectors were simply praying, singing, chanting, taking photos, or trying to aid the injured when they were drenched with freezing water, gassed and shot at for hours. We can’t allow this to continue when all over the country, indigenous peoples and their allies are taking a stand against fossil fuel pipelines and the desecration of native land and the environment.”

One of the declarations submitted by plaintiffs was by former Baltimore Police Commissioner Thomas Frazier, who opined:

“The use by law enforcement of shotgun fired bean bag rounds, as seen in video supplied to me by the plaintiffs, is excessive. These are highly dangerous weapons which should never be used indiscriminately in a crowd, yet that is exactly what I saw based on the video evidence. It is inappropriate and excessive force to shoot bean bag rounds, or to launch direct impact sponge rounds, into a crowd for the purpose of crowd dispersal…

“The brute force of the impact of the water jet is a force option that would not be considered appropriate by most modern police chiefs or sheriffs, or tolerated by their citizenry. In this case, the use of this device in sub-freezing temperatures, in my opinion, serves no reasonable purpose and can only be considered a retaliatory and punitive action.”

Commissioner Frazier went on to explain: “Law enforcement’s unnecessary use of these [munitions] and the resulting serious injuries from their use are important reasons which justify the Plaintiffs’ request that this Court prohibit the reckless use of the these weapons. If the victims of these weapons had violated the law, there were enough law enforcement officers present to arrest them. Therefore, there exists no reasonable justification for their use.”

Defendants Morton County Sheriff Kyle Kirchmeier and other law enforcement defendants can be expected to file a response in the 8th Circuit in about a month. The plaintiffs expect amicus (friend of the court) briefs to be filed by the ACLU and Amnesty International supporting their arguments.

If you are a Water Protector and need legal assistance, please call the WPLC Hotline at (701) 566-9108.
If you need travel assistance returning to North Dakota, contact the Freshet Collective at (605) 519-8180.