UPDATED on December 2, 2018: WPLC Cooperating Attorney Melinda Power called the Jessee decision: “a good victory for… everyone arrested on November 15th…”. Power was right. Another of her clients with the same charges from the same day,  Water Protector Brian O’Keefe, who’d been scheduled to stand trial on November 27, had his charges dismissed by Morton County prosecutors on November 23.

Mere Presence at Railroad Tracks Is Not Tampering With a Public Service: State Felony Conviction Reversed 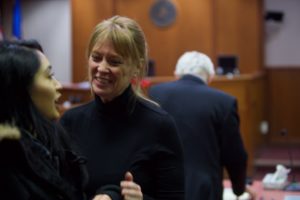 Jessee and 26 others were arrested close to a railway track near Mandan. They had attempted to access a DAPL construction site to pray and participate in a ceremony aimed at calling attention to the adverse social and health impacts of the oil industry and “man camps” – temporary housing for oilfield workers that become havens for gendered violence and human trafficking of Indigenous women and girls. Law enforcement blocked the group at the railroad tracks, ordered them to disperse and proceeded to arrest them.

WPLC volunteer attorney Melinda Power, who argued the appeal before the five Supreme Court justices on September 7, 2018 in Bismarck, ND, called the decision “a good victory for Rebecca Jessee, everyone arrested on November 15th, and for Water Protectors generally.”

The court ruled that Jessee’s mere presence at the railroad tracks did not constitute “tampering”. The opinion, written by Justice Daniel Crothers, states that “…no evidence supports the finding Jessee was tampering with Burlington Northern Santa Fe Railway property based on her passive presence on railroad property. Jessee did not alter the railroad tracks in a harmful manner.”

Power noted that the court also acknowledged the goal of the people who had gathered for the prayer walk that day was to go to the pipeline construction yard, and, by making that finding, implicitly found that the railroad tracks were not the intended destination of the walk.

“That had been a contested fact,” she said. “This ruling undercuts the lower court’s conclusion that people were trying to interfere with the railroad tracks. The Supreme Court acknowledged that the group’s goal was to get to the construction yard, but they were stopped at the railroad tracks by police.”

Pleased with the positive outcome, Jessee praised her defense counsel for “speaking softly and carrying a big stick.” Jessee says she stands with Water Protectors adding that the “the elephant has not left the room.” In fact, her partner will appear today in Bismarck for his own appeal hearing.

Power expects this ruling to be useful to other WPLC attorneys defending Water Protectors arrested on the same day. She pointed out that at the trial level, no documentation had been introduced that the train stoppage ordered by law enforcement caused any monetary loss or any delay in service.

“There was no documentary evidence or testimony presented to the court, that any costs to the railroad were directly attributable to Ms. Jessee or any other defendant,” she explained.

Power praised the Court’s opinion, “They did their research and found good North Dakota law that defines what tampering is. As I argued, tampering requires that there be a harmful change or alteration. I give the Supreme Court a lot of credit for their commitment to researching North Dakota law and applying the correct legal standard.”