On  September 10, 2020, in a long-awaited ruling, Judge Daniel Traynor allowed Dundon et al. v. Kirchmeier et al., the lawsuit challenging law enforcement’s Nov. 20, 2016, attack on water protectors on Backwater Bridge with firehoses, impact munitions, grenades and teargas, to move forward with discovery. The case had been stalled for more than two years after Morton County and other defendants filed a motion asking the court to dismiss the case. Read our press release here.

We Need Your Information 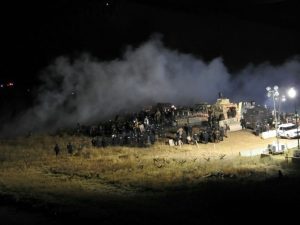 Dundon v. Kirchmeier is a federal civil rights lawsuit challenging police violence on the night of November 20-21, 2016, at Backwater Bridge, near the Oceti Sakowin camp and the site of the DAPL pipeline in North Dakota. The case was filed on November 28, 2016, in federal court, as a class action lawsuit on behalf of all persons who were injured by law enforcement that night.

Plaintiff Vanessa Dundon is a member of the Navajo/Diné Nation who was shot in the eye with a teargas canister that night, suffering a partial vision loss. She and eight other named Plaintiffs represent a class of several hundred water protectors who were injured by high pressure fire hoses, explosive grenades, chemical agents and impact munitions while peacefully protesting and engaging in prayer in opposition to the Dakota Access Pipeline.  The lawsuit is asking for monetary compensation for everyone who was injured, and changes in  law enforcement practices to stop this from happening again.

On September 10, 2020, newly assigned federal judge Traynor rejected the law enforcement / government defendants’ motion to dismiss the case. He issued an order that instead allows us to proceed with discovery to give us the evidence we need to disprove the governments’ arguments that water protectors had no right to be on the bridge and that they were supposedly attacking the police.  Although the judge limited the scope of the initial discovery, the Water Protector Legal Collective cooperating attorneys will be able to question Sheriff Kirchmeier, other local government officials, and a TigerSwan executive under oath.  Some of the named plaintiffs will also be deposed and then there will be a further ruling from the court which we hope will allow the case to proceed to full discovery and trial. If you were injured that night, please be sure to update your contact information under “We need your information” above so that we know how to get in touch with you as the case proceeds and if we recover money for you.