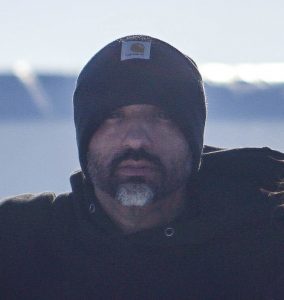 Bismarck, ND: Michael “Little Feather” Giron was today sentenced to a 36 month federal prison term pursuant to a non-cooperating plea agreement, becoming the first Water Protector arrested in relation to the DAPL pipeline resistance at Standing Rock to be sentenced to a substantial prison term and the first of the federal cases to conclude.

As per the terms of the non-cooperating plea agreement, the Use of Fire to Commit a Federal Felony Offense charge was dismissed and both sides recommend a sentence of 36 months for the charge Civil Disorder. However, the judge did have the authority to go as high as 60 months. Little Feather has been incarcerated since March 9, 2017 and will be credited with time served during the past 15 months.

“The sentence imposed today reflects the judge’s recognition of the positive changes that Little Feather has made in his life due to his time at Standing Rock. It is an endorsement of all the progress and this new chance he has for a spiritual life in connection with his ancestors and his relatives,” said Little Feather’s attorney Peter Schoenburg.

Little Feather is from the Coastal Band of the Chumash Nation, raised in Santa Barbara, California. During the Standing Rock encampments, he served as Akicita – in service to elders and the camp community. During the hearing today six witnesses spoke passionately about how valued and missed Little Feather is by his family and community.

“The Standing Rock movement lit so many spirits on fire all over the world – inspired by the youth and the prayer camp that grew into the largest gathering of indigenous nations in history. It was a pivotal moment that called many of us, from youth to elders, to become active in our communities, rekindle relationships with family, go back to school, stay sober – taking steps to carry this work forward.

We are so grateful to finally be able to start counting the days until Little Feather will return home to his family and community and we appreciate all the amazing support we have received.

In this historic movement moment it is critical to maintain solidarity with those who stepped up and are now being targeted as leaders. The legacy of genocide and broken treaties has shown us that when indigenous people stand up to protect the water and the land from the colonization of resources, we will always be met with repression and violence. This struggle continues.”