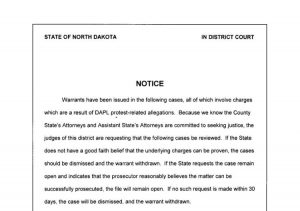 (Bismarck, ND) On December 7, 2018, Water Protector Legal Collective received an early winter solstice gift that we have had to keep confidential until now. On behalf of the judiciary in the South Central Judicial District, North Dakota, Judge Gail Hagerty ordered the State’s Attorney’s office to review, within 30 days, all NoDAPL cases attached to 84 inactive warrants. Judge Hagerty wrote:

“If the State does not have a good faith belief that the underlying charges can be proven, the cases should be dismissed and the warrant withdrawn.”

It was an exhilarating and welcome turn of events, and there was more. Prompted by WPLC’s requests to the Court, two Supplemental Notices were issued, adding 10 more cases to the list of cases being reviewed. Suddenly, 94 warrant cases would finally need to meet at least this minimal Constitutional requirement – a standard even prosecutors had to admit could not be met for 45 of them.

But we had a concern: the temporary licenses for out-of-state volunteer lawyers to represent Water Protectors with warrants were set to expire on December 31, 2018, under the special provisions for NoDAPL cases that WPLC won back in January 2017. Worried that prosecutors might decide to go forward with some of the cases after our ability to renew these licenses had ended, WPLC went back to the Supreme Court and asked for an extension until January 31, 2019, which was granted.

Today we can announce that the state has once again been forced to acknowledge what we have long known to be true—these charges were without merit and should never have been brought or pursued. These arrests were an improper use of police to prevent lawful activities, and the anxiety and harms inflicted on Water Protectors who have now also suffered through two years of meritless prosecution was further punishment by process.


“You’re a fugitive. It has a huge effect on you,” said Diné Water Protector Christian Espinosa whose warrant was one of the 45 quashed upon review. “My professional license was at risk. You can’t get certain jobs, your whole ability to navigate society, your standing, changes. It was all so arbitrary. No landowner ever said we were trespassing. The whole thing was baseless—an attack on our liberties and constitutional rights.” 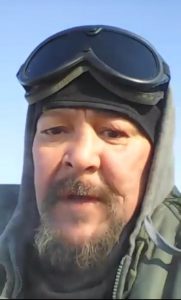 Diné Water Protector Christian Espinosa at Last Child Camp on February 1, 2017,
just moments before he was slammed to the ground by law enforcement.

Karla Colon Aponte staffs the WPLC Warrant Team which was formed to conduct a focused outreach to warrant holders and work to resolve their cases. “Some had resolved their original cases and were unaware they’d been recharged,” she explained. “Others were hard to get ahold of because they live on reservation lands and/or don’t have physical street addresses, are out of cell range, or have Internet connectivity issues.”

WPLC staff and volunteers combed through court filings to locate contact information, and met weekly to brainstorm about how to resolve individual warrants. Sometimes it was a matter of paying outstanding fees or showing how the case was similar to cases already dismissed. Other times the Water Protector was reluctant to resolve their warrant because they’d been traumatized by brutal arrests; others, on ideological principles, rejected ceding authority to the North Dakota judicial system. For some of these cases, WPLC cooperating attorneys were able to arrange to have the warrants lifted and cases resolved without the Water Protector needing to return to North Dakota.

In spring of 2018, WPLC placed ads in community news outlets across Indian Country, and then conducted a summer Warrant Outreach Tour to pow-wows throughout North and South Dakota. Through this sustained effort, the team resolved 27 warrants even before Judge Hagerty’s Notice.

Aponte herself is a Water Protector and former warrant holder.

“One of my mottos whenever I went to the front lines was ‘nobody gets left behind.’ Reducing harm for my Water Protector family is important, and I’ve been doing my best because I stand with those who stood so boldly for clean water and Indigenous sovereignty.”

How Did These Warrants Arise in the First Place?

When the Standing Rock Sioux Tribe put out its call for people to come and stand with them against the construction of the DAPL pipeline that threatened the reservation’s water source and sacred sites, people from all over the country and the world, were pulled to Standing Rock to answer that call. They came to pray together and to protect the sacred and were consequently criminalized by police and a legal apparatus in thrall to the oil and gas industry.

Water Protector Legal Collective (WPLC) is the on-the-ground legal team for the Dakota Access Pipeline resistance at Standing Rock. We continue to maintain a presence in North Dakota and provide legal advocacy, jail and court support, and civil and human rights protection to the Native peoples and their allies who gathered at the ceremonial resistance camps. Learn more at: