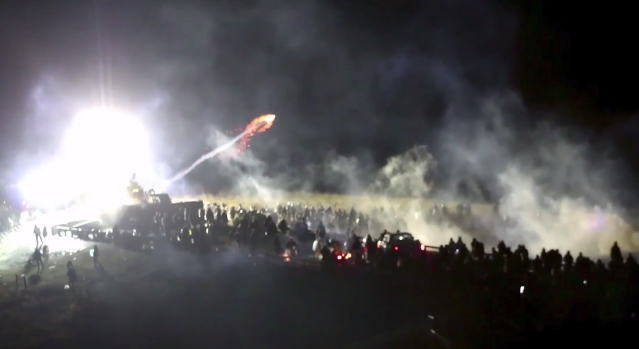 Today we mark the anniversary of one of the most shameful and extreme incidents of police violence at Standing Rock.

We watched in disbelief and horror as a highly militarized police force turned water cannons and fire hoses on Water Protectors in sub-freezing temperatures, launched explosive grenades and fired rubber or plastic bullets and other dangerous munitions. Over 200 peaceful protestors were injured that night – some very seriously.

WPLC is fighting for accountability in the courts. We filed the civil lawsuit Dundon v. Kirchmeier within days of this event. The case continues – just last week we had a ruling from the 8th Circuit Court of Appeals and we are now moving towards trial.

We ask everyone to remember that for the Water Protectors who are still facing criminal charges the trauma and harm from police and other state violence at Standing Rock is still ongoing. Over 300 cases remain pending in North Dakota courts, including over a dozen from this night at Backwater Bridge one year ago. We also have six Water Protectors preparing for federal criminal trials – the first will be Red Fawn at the end of January 2018.

This battle is far from over.

This night was also what led to Water Protector Steve Martinez being subpoenaed by a federal grand jury. Steve’s unwavering resistance was a dramatic success and is a reminder of what we can achieve when we stand in solidarity with each other.

In recognition of the deep impact and trauma that we carry with us from having been at Backwater Bridge that night, or from experiencing the many other incidences of police and other state violence directed towards Water Protectors, WPLC has compiled a list of healing resources to share with our communities.

We are honored to stand with you all in this ongoing struggle.