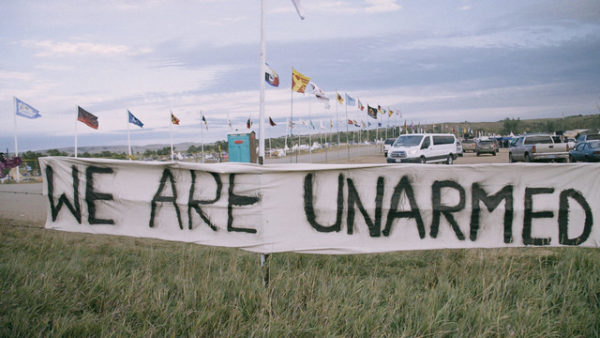 MANDAN, N.D.  — At a ceremony Saturday in Fargo, North Dakota, an award was conferred by the North Dakota Human Rights Coalition upon Water Protector Legal Collective for championing the human rights of Water Protectors arrested in the NoDAPL resistance at Standing Rock from August 2016 to February 2017.

NDHRC has made the annual award for the last ten years to individuals and organizations “who are persistent in putting their weight behind bending the long arc of the moral universe toward justice,” according to Barry Nelson, the organizer of the awards ceremony. This year WPLC shares the honor with two other recipients: journalist Chris Hagen of the High Plains Reader and Pastor Joe Larson of the St. Marks Lutheran Church, both in Fargo. Hagen has been an ardent chronicler of the Standing Rock story for his paper and Pastor Joe is bringing visibility to North Dakota’s LGBTQ community.

WPLC was nominated by Rev. Karen Van Fossan, minister of the Mandan-Bismarck Unitarian Universalist Congregation, who wrote in her statement of nomination:

Their work is not only justice work; it is healing work. They bring a spiritual, even loving, presence to the challenging role of human rights defense in our time. They are in the courtrooms, the jails, the prisons, the rallies, the meetings, the carpools, the dinners, the prayers. They organize, they strategize, they motivate, they support. Their work is imbued with prayer, and their prayer feeds their work.