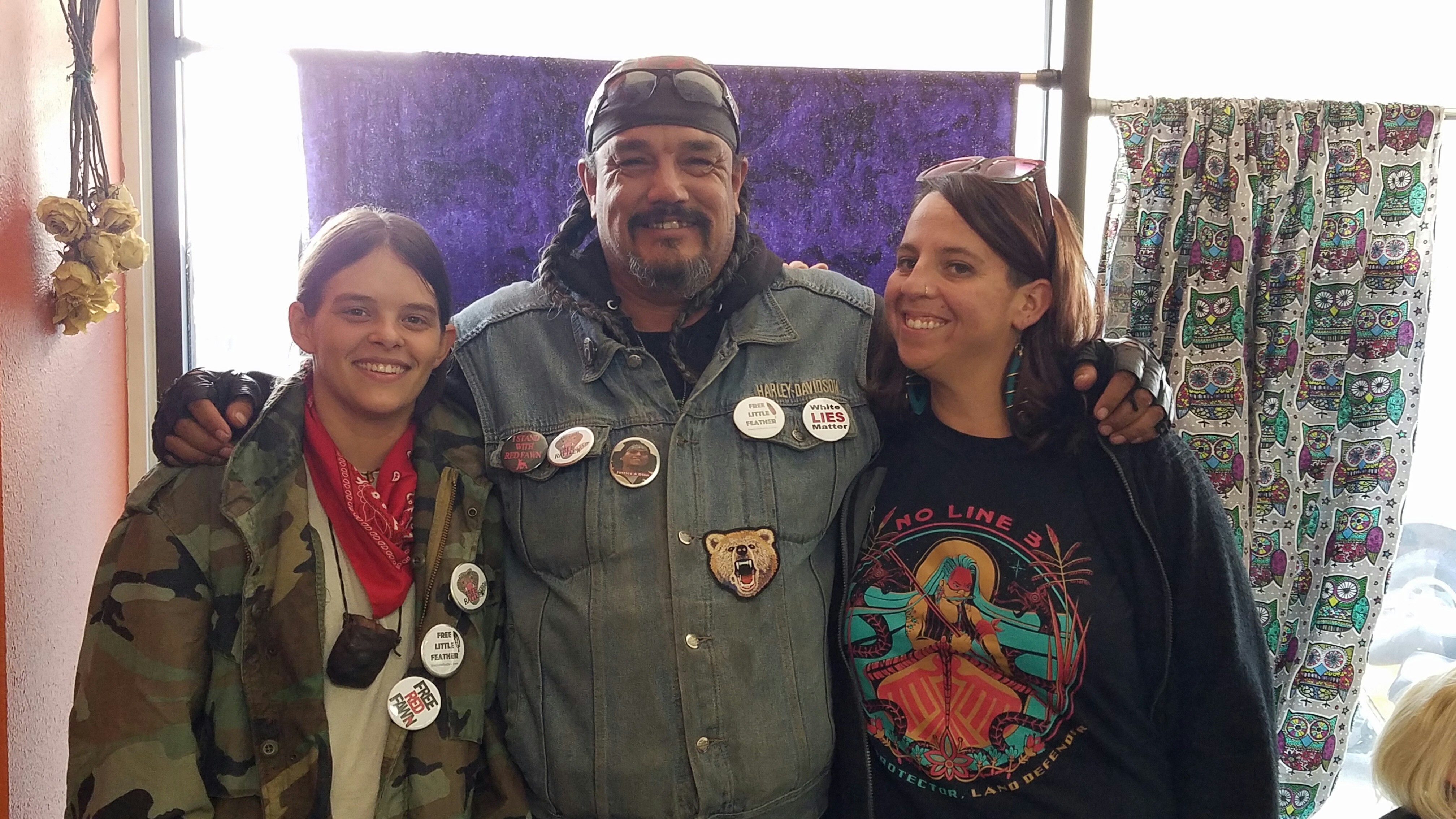 Bismarck, ND: Michael “Rattler” Markus was sentenced yesterday to a 36 month federal prison term pursuant to a non-cooperating plea agreement, becoming the third Water Protector arrested in relation to the DAPL pipeline resistance at Standing Rock to be sentenced to a substantial prison term.

As per the terms of the non-cooperating plea agreement, the Use of Fire to Commit a Federal Felony Offense charge was dismissed and both the prosecutors and defense team recommended a sentence of 36 months for the charge of Civil Disorder.

Presiding Judge Daniel E. Hovland said he’d respect the agreement and commended Rattler for his compliance with pretrial supervision. He also said that he’d suggest that Rattler be placed in Federal Prison Camp, Yankton, which is a minimum security prison in South Dakota. Rattler will be allowed to self-surrender on November 26, 2018.

“I’ve never seen someone in a federal case be able to self-surrender to the Bureau of Prisons on his own terms,” said Rattler’s attorney Sandra Freeman, a long-term lawyer with Water Protector Legal Collective. “The court’s leniency reflects that Judge Hovland saw, heard and understood what a good person Rattler  is and what motivated his actions at camp.”

Rattler said in court yesterday that he came initially to deliver supplies but stayed in camp after the events of September 3rd when DAPL bulldozers destroyed sacred sites including grave sites, and private security forces sicced dogs on Water Protectors. He soon became an Akicita (or defender) standing between police and Water Protectors, with the aim of keeping everybody safe.

He was arrested in connection with the turmoil on October 27, 2016, a day in which law enforcement officials used sounds cannons, tanks, tasers, bean bags, rubber bullets and pepper spray against unarmed Water Protectors, and broke sacred objects, tore down tipis, confiscated prayer staffs and demolished an inipi (or sweat lodge), arresting the people in the middle of ceremony within. But he wasn’t indicted until February, 2017. Freeman says that Rattler’s arrest was politically motivated as a justification for law enforcement’s brutality on October 27 and November 20.

After an hour of testimony from five character witnesses who spoke of Rattler’s reliability, selfless service to others, and commitment to the Red Road of sobriety and spirituality, prosecutor Gary Delorme said that punishment was in order because “what if the fire had spread and the area had been engulfed in flames?”

“This system is not set up to punish people for what might have happened,” Freeman said.

Rattler’s partner Olive Bias considers yesterday’s sentence a victory because Rattler escaped “death by incarceration.” Olive says the government’s attempts to divide and conquer, especially when his case was  separated from other defendants, was a move  intended to “snitch-jacket” him, or make him appear to be an informant, and that they  were unsuccessful.

Fewer than 3% of federal criminal cases end up going to trial, resolving instead with plea agreements because the risks of being found guilty at trial are so high and the sentences are so severe. Had Markus proceeded to trial and been convicted he would’ve risked a minimum of 15 years in prison.

“Colonial court is all about what looks good and bad on paper; rewriting the history of camp has been enforced by the courts and media since day one,” Olive said. “One example is making Rattler out to be a leader, a snitch, violent, or a re-offender through these federal charges as blatant divide and conquer tactics, but it was ineffective. He took a non-cooperating plea and had the support of Water Protectors to make sure that happened.”

After court yesterday, Rattler, Olive, Freeman, WPLC staff and other supporters went to the riverbank of Mni Sose to lay down tobacco and offer prayers.

“I’ll include Judge Hovland in my prayers,” Rattler said. “I already do. We all live on this earth together. They segregate us because we have a different color skin, but we’re all red underneath.”

He says he’ll also be praying for the people at other pipeline struggles: the Mountain Valley Pipeline in West Virginia, Bayou Bridge in Louisiana, Line 3 in northern Minnesota, KXL in Montana and South Dakota, and those standing in opposition to mining the Black Hills. “Because they may lock me up but thousands will take my place,” he said.

“I am praying that they have the strength to keep up the fight and to get more people out there,” he says. “Standing Rock was a training ground. It was started by children, by the youth. Those are the generations that we’re thinking about. What are we going to leave them—birds animals, rivers? What kind of legacy do you want to leave your children? For rich people, it’s a big bank account. For me it’s Mni Wiconi—water is life.”

Supporters can make a financial contribution directly to Rattler here.