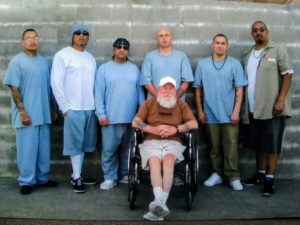 Little Feather has accepted a non-cooperating plea agreement. On May 30, 2018, he was sentenced to a 36 month prison term.

In accordance with the terms of the agreement, the Use of Fire to Commit a Federal Felony Offense charge was dismissed and the judge accepted the joint recommendation of 36 months on the Civil Disorder charge.

To learn more about Little Feather and how to support him, please visit his Support Committee website here.  Supporters can make a financial contribution directly to Little Feather’s Paypal here.

You can also make a financial contribution to the legal defense for Little Feather and the other Water Protectors facing federal charges here.

Defense Objection to Order re Motion to Search and Disclose Evidence (January 25, 2018)

Exhibit A to Memorandum in Support of Change of Venue (October 12, 2017)

Defense Memorandum in Support of Change of Venue (October 11, 2017)

Defense Memorandum in Support of Motion to Compel Discovery (September 6, 2017)