WPLC brings the voices of Indigenous water and land protectors to the international community. 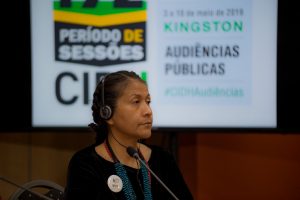 In a searing report submitted to the United Nations on October 3, 2019, WPLC and the University of Arizona Indigenous Peoples Law & Policy Program (IPLP) documented: 1) disproportionate punishment of indigenous environmental activism in the United States; 2) state and private collaboration to violate the civil rights of water protectors; 3) legislation intended to suppress resistance to the fossil fuel industry; and 4) the US’ failure to comply with its treaty obligations to indigenous peoples.

Through the Universal Periodic Review  (UPR) process, the UN Human Rights Council will be reviewing the United States in May 2020 to assess its human rights record, address human rights violations and make recommendations for redress.

The report to the UN builds on WPLC and IPLP’s ongoing work to bring the voices of indigenous environmental and human rights defenders to the international community and bring international scrutiny to the criminalization and repression of indigenous resistance to extractive industries in the United States. In May, 2019, WPLC and IPLP brought four Indigenous women to testify before the Inter-American Commission on Human Rights (IACHR). The IACHR is an organ of the Organization of American States (OAS) whose mission is to promote and protect human rights in the hemisphere. Our original request for a hearing on repression of indigenous environmental defenders in the US was turned down, but after organizing support of more than 70 national and international organizations and Indigenous governing institutions, we were granted a hearing during the May, 2019 session which was held in Jamaica. Watch the video.

The indigenous women water and land protectors presented testimony on the use of wrongful arrests, abusive conditions of confinement, and excessive force against water and land protectors. WPLC attorney Michelle Cook, Diné, discussed  the “critical infrastructure” laws being pushed through by the oil industry in multiple states and at the federal level to criminalize and impose harsh penalties on anti-fossil fuel protest. We also presented testimony of WPLC board member Ofelia RIvas, Tohono O’Odham, on the extreme militarization escalating on the US-Mexico border, where her nation and several other Indigenous nations are resisting construction of the border wall. The wall not only cuts through Indigenous communities and threatens sacred and burial sites and wildlife, but eases the way for fossil fuel pipelines, because numerous environmental, historic preservation and other laws have been waived for the wall construction. 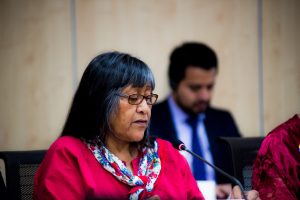 The United States sent several representatives, and the Commissioners had pointed questions for the United States on its repression of indigenous resistance.  We submitted a detailed report rebutting the US’ presentation and documenting violations of the US’ obligations under the American Declaration on the Rights and Duties of Man and American Declaration on the Rights of Indigenous Peoples. We were later asked to submit this to contribute to a public report being prepared by the IACHR and the Office of the UN High Commissioner for Human Rights (OHCHR) on the criminalization of human rights defenders in the Americas.

In the coming year, WPLC will be expanding this area of work to support Indigenous protectors across the Americas and to train additional Indigenous law students and lawyers to advocate for our people in international fora. In doing so, we are building alliances between indigenous human rights defenders around the world and entering the human rights violations  into the international record to provide protectors, activists, indigenous nations, scholars, diplomats, and policy makers with another tool to combat extraction and the ongoing process of settler-colonialism. The record we are helping create also supports campaigns in which we and our partner Divest Invest Protect are pressing global financial institutions to divest from the fossil fuel industry and other industries that harm Indigenous peoples and all of us.