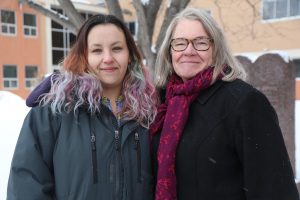 WPLC Cooperating Attorney Patricia Handlin defended Water Protector Katrina Silk against five misdemeanor charges in two cases today in Morton County, Judge David Reich presiding. Handlin  was assisted at today’s trial by local counsel Amanda Harris. Silk was found not guilty of Engaging in a Riot, Disobedience of Safety Orders During a Riot, Criminal Trespass and Disorderly Conduct, but was convicted of Physical Obstruction of a Government Function. Judge Reich sentenced her to 60 days of deferred unsupervised probation (after which her record will be expunged) and a $325 fine to be deducted from her bond.

“These cases should never have been brought and should not have proceeded,” Handlin said. “My client Katrina Silk has had this hanging over her head for two and a half years now, which has had real-life ramifications for her, as for others.”

Among other adverse consequences, Silk was unable to rent an apartment for herself and her children—every time a potential landlord ran a background check the five charges appeared and she lost her chance to secure housing.

This is painfully ironic given that Silk, who is Lakota, was arrested for criminal trespass on unceded treaty lands where she had every right to be.

The charges against Silk stemmed from October 22, 2016, a mass arrest day of intense police brutality against Water Protectors walking in an open field towards a DAPL construction site to check on Water Protectors who were locked down to equipment. 140 Water Protectors were taken into custody that day after many were beaten with truncheons, pepper sprayed, kettled and otherwise brutalized—the police aggression was captured in a video report by Jihan Hafiz and published at The Intercept.

“It is really unfortunate that Morton County chose to treat the Indigenous people here so badly,” Handlin said.

Handlin is one of 31  volunteer lawyers practicing in North Dakota under special procedures for attorneys from other states admitted to help with the NoDAPL cases under the state’s Pro Hac Vice program. While most of them worked on multiple cases, Handlin has devoted untold hours volunteering to defend dozens of Water Protectors.

Now that WPLC’s criminal defense program in North Dakota has concluded she reflected on her experiences.

The prayerful, peaceful protests could have been handled so differently and with respect. It is unfortunate that what I assume was the influence of TigerSwan and Energy Transfer Partners fell on the fertile soil of fear and antagonism against the Indigenous Peoples who inhabit this land, who have done so for thousands of years, long before Europeans came here, and who remain here, strong and resilient people.

The rights preserved by the Fort Laramie Treaties of 1851 and 1868 were wholly ignored by the government in their erroneous and misguided belief that they were preserving the rule of law. They were doing the opposite, in fact, as evidenced by the number of cases which were dismissed.

I am grateful to the Judges who followed the law and to everyone who showed support and kindness to me and to the other lawyers who came from around the country to represent Water Protectors and most importantly to the warmth and generosity of the Standing Rock Sioux tribal members.

Katrina Silk had this to add:

“I’m glad that it’s over and I’m happy that the judge saw that there was no riot, no criminal trespass and no disorderly conduct from that prayer walk.”