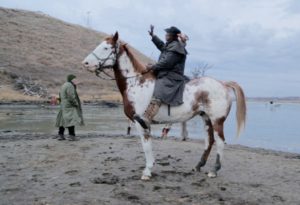 Bismarck, ND: James “Angry Bird” White was sentenced in federal court on December 5, 2018 to time served plus two-years of supervised release and a $100 assessment pursuant to a non-cooperating plea agreement. Though the prosecution had requested a term of home confinement, a curfew, an electronic monitor and prohibition from participating in future protests, Judge Daniel L. Hovland did not see the necessity for these or any other additional punitive conditions.

As per the terms of the non-cooperating plea agreement, the Use of Fire to Commit a Federal Felony Offense charge – which carries a mandatory minimum sentence of 10 years – was dropped. Combined with the maximum sentence for the Civil Disorder charge, Angry Bird was facing up to 15 years in prison.

He is one of 6 people who were named in the federal indictment arising out of events on October 27, 2016. The time served portion of his sentence refers to the approximately 8 days he spent in prison before being released under court supervision to prepare for trial.

Angry Bird is a direct descendant of Chief Two Bears who was a signatory to the Fort Laramie Treaty of 1851.

It was a great relief for his family, friends and many supporters who filled the gallery to capacity that Angry Bird could go home to Fort Yates after sentencing. Supporters had traveled from Providence, Rhode Island and New York City to stand in solidarity with him. Prayers were spoken before and after the hearing outside the federal courthouse in Bismarck.

Below is part of a statement that Angry Bird prepared to read during sentencing. He ultimately chose not to read it to the judge, but he requested that we share it now:

I did what I thought was right for the safety of others I might have known and others who I never met.

I now know that we live in two different worlds on the same earth – the one we live in and the one you live in.  I am still in a deep fog between both worlds. The world I live in includes the ways we were taught and how to show respect.

I tried to keep everyone safe in camp, and also to keep the water and the earth safe from danger that will occur in the future.

Life is tough for many, as we all know, and good for so few.  For us growing up, being in boarding schools was not so good.  But we are still living, trying to forget the pain and shame of what happened to me and so many others at a young age.

The way people in the other world that you live in see us and judge us is easy to understand for they do not live in my shoes or climb the ladder I have to climb or had to climb.

I tried to live in both worlds – as a vet and a father sending my offspring and others to the other world to make a better place. We all need to come to an understanding that we are killing the earth for money and profit. But we forget what we are destroying for our future generations. We need to come together as one – not as one better than the other – and to remember it’s going to take us all to help fix what we’re destroying.  If not for us, then for our children and children’s children to live.

I tell others that you must travel the path you need to travel.  Don’t look at the bad but look at the good to help you reach your goals.