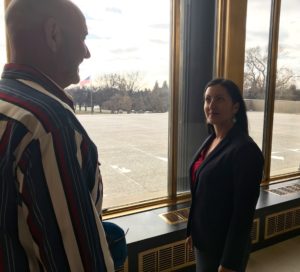 Bismarck, ND: Today, the North Dakota Supreme Court ruled in favor of Water Protector Mark Hebert, reversing his lower court conviction arising out of a November 15, 2016 prayer walk in commemoration of missing and murdered Indigenous women. He had attended the ceremonial walk with his partner Rebecca Jessee who also was arrested, convicted and won her appeal on November 6, 2018.

Also today, the ND Supreme Court denied the prosecution’s request for the court to rehear it.

WPLC Cooperating Attorney April Olson who argued Hebert’s appeal before the justices was pleased with her client’s victory. She said:

This decision is another victory for Water Protectors. Today, the Supreme Court affirmed Mark Hebert’s right to peacefully protest by reversing his conviction for Tampering with a Public Service. Mark, like the other demonstrators that day, was there to bring attention to the important issue of missing and murdered indigenous women.  Mark was peacefully protesting and did not damage, harm or alter the railroad.  As Ms. Power noted in the Jessee case, the Supreme Court did good research and applied the correct standard under North Dakota Law.