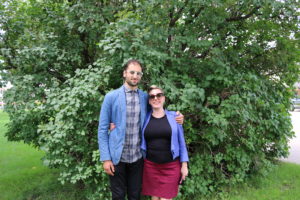 Photo: Afnan Khan and WPLC Staff Attorney Moira Meltzer-Cohen after the dismissal of charges at a bench trial in Mandan, ND.

North Dakota Supreme Court District Judge Bruce B. Haskell dismissed the Class A misdemeanor charge of Physical Obstruction of a Government Function and entered a judgement of acquittal for Water Protector Afnan Khan, arrested during the forced removal of Oceti Sakowin camp 17 months ago. In dismissing the charge and acquitting Khan, the judge pointed out that the state had failed to present facts that would show that the defendant had intentionally obstructed a government function.

Judge Haskell’s determination is in alignment with three previous acquittals on June 22, as well as the prosecution’s June 27 dismissals of charges against 11 Water Protectors on the basis that their cases were substantially the same. Afnan and the other 14 Water Protectors were accused of obstructing law enforcement’s efforts to clear the Oceti Sakowin camp on February 23, 2017, pursuant to Governor Burgum’s executive order declaring the camp hazardous to people and the environment.

The government argued at trial that Afnan’s presence at Oceti was an intentional act, and that it was a violation of the governor’s order, whether or not he knew about that order. Testimony from Morton Country Sheriff Kyle Kirchmeier and a state trooper as well as from Khan, however, suggested that he had not been given notice of the executive order, nor was he given any warning or opportunity to leave the camp. Some references were made to announcements broadcast from a Long Range Acoustic Device, or LRAD, which was on the scene as the camp was being cleared, but the prosecution did not provide any evidence that Khan was in hearing range.

Khan was represented by Water Protector Legal Collective Staff Attorney Moira Meltzer-Cohen, who argued that in the absence of notice or an opportunity to leave, Khan did not have the intent necessary to prove the charge of physical obstruction, and that in any case, he did not in any manner actually obstruct anything.

Khan, who is Muslim and lived in the Two-Spirit camp while participating in the NoDAPL resistance at Standing Rock, traveled to North Dakota from his home in Ottawa to appear in court where he faced monetary fines and a possible penalty of up to 360 days in prison. He testified that it was not his intention to be arrested.

After his acquittal he reflected upon his experience as an arrestee and defendant.

“My arrest was unfortunate,” he said, “disempowering. I lost my voice when I got out of jail; I couldn’t speak, I was afraid to speak. There’s nothing cool about having your freedom taken away. There are costs to your own personal life; I felt stuck in a hole. I was in a precarious financial situation—if it weren’t for WPLC, I would still be in that hole.”

Six similar cases stemming from arrests made on February 23, 2017, are scheduled to proceed to trial in the coming weeks.