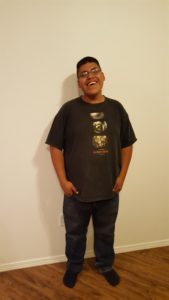 Bismarck, ND: Dion Ortiz was sentenced on October 22, 2018 to a 16-month federal prison term pursuant to a non-cooperating plea agreement, becoming the fourth Water Protector arrested in relation to the DAPL pipeline resistance at Standing Rock to be sentenced to a substantial prison term. The sentence was a downward variance from the federal sentencing guidelines—37 to 46 months—and eight months less than the two-year sentence requested by U.S. prosecutor Gary Delorme. With credit for time served it is likely that Dion could be out in April.

“We’re pleased with the result,” said defense attorney Thomas Anthony Durkin of the Durkin & Roberts law firm and its pro bono arm, The Rerum Novarum Human and Civil Rights Center of Chicago. “Judge Hovland gave thoughtful consideration to the uniqueness of Dion’s situation and to the sentence we requested. I think he understood Dion’s involvement in the movement and emotional commitment to something he considered greater than himself.”

As per the terms of the non-cooperating plea agreement accepted by the court on July 17, 2018, the charge of Use of Fire to Commit a Federal Felony Offense, which carries a mandatory minimum sentence of 10 years and the possibility of up to 15 years in prison, was dropped. Judge Hovland said that he would recommend that Dion be incarcerated in either a county jail facility in North Dakota or a low-security prison camp. The decision of where Dion will be placed rests with the Bureau of Prisons.

Both the prosecution and the defense team agreed that the idea to set the fire on the Morton County Road 134 bridge on Oct. 27, 2016 did not originate with Dion, nor was he a leader in lighting the fire. Delorme asked for a 24-month sentence to serve as a deterrent to future Water Protectors who come to stand against the KXL pipeline, saying “our neighbors to the west and the south will appreciate it as this pipeline goes through.” He added that a two-year sentence would make future protestors “think about the repercussions.”

Asking for a sentence of one year and a day, Durkin told the court that a one-year step-down was not a sufficient drop to reflect Dion’s lesser culpability than Water Protectors Michael “Little Feather” Giron and Michael Markus, both of whom were sentenced to 36 months.

Addressing concerns about the prosecutors comments on deterrence, Durkin added that he hoped the prosecutor had not meant deterrence of pipeline protests themselves, but only deterrence of potential violence. But as for making Dion, who had come to camp when he was only 19-years-old, a standard bearer for deterrence, he argued that a one-year sentence for a youthful first offender is not “a slap on the wrist,” and deterrence could be equally accomplished by a one-year term.

No witnesses were called to testify but Dion’s mother, sister, aunties and cousins traveled from their home on the San Felipe Pueblo reservation in New Mexico. Tears fell at seeing their family member in prison stripes and shackles and again when Dion apologized to the court “for putting my family through this.”

“My son had a purpose,” said Dion’s mother Christina Ortiz. “He had this image that he could help protect the water. Water is life, that’s why he was there. Whatever he did to protect the water and the Water Protectors, he did out of love.”

“He made himself a warrior and involved himself for the people,” said Martina Ortiz, Dion’s 25-year-old sister. ”He was fighting for something sacred. To us he’s not only a brother and a son, he’s more like a hero to everybody now.”

Dion told the court that he was motivated to pursue his GED and a driver’s license. His mother said this experience is making her baby grow up fast.

“Dion is one of our youngest Water Protectors,” said LaDonna Bravebull Allard, a founder of the Sacred Stone Camp and a former historian for the Standing Rock Sioux tribe. “I hoped the court would be even more lenient, but was grateful that the sentence wasn’t two years. Dion’s a young man with a lot of hope and potential. I expect great things from Dion and ask everybody to continue to support and help him.”